May 1 – October 31 7am to Sunset Off-Season Information

Two playground structures are located just off the main loop trail near the library and the octagon open picnic shelter, at the east end of the park.

A paved trail two-thirds of a mile long encircles the main recreation area of the park, and is popular for walking and jogging. Three loops around the park on this scenic trail add up to a total of two miles. 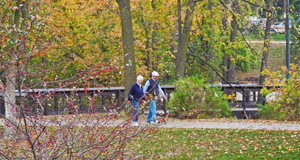 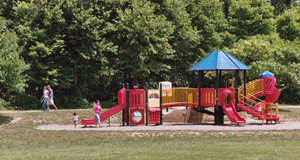 This property originally served as a fish hatchery for the State of Michigan, with trains loading tanks of fish for distribution throughout the state. Trains used the rail access to load tanks of fish for distribution throughout the state. In 1949, the property was deeded to Kent County by the State of Michigan for use as a county park. The new park was named after the former head of hatchery operations. The park also features a historic train depot that houses the Grand Rapids Model Railroad Historical Society.

In the 1800’s the property that is now Dwight Lydell Park looked very different than it does today. At that time the creek was still a wild, meandering, undeveloped stream corridor. In the mid 1800’s a saw-mill was erected and in the late 1800’s the property became a fish hatchery for what is now the Department of Natural Resources (DNR). During this period the creek was lined with concrete, walls were erected, and control structures were formed on the creek to divert water to the fish hatchery and saw-mill.

In 1949, the State deeded the property to Kent County for a park which was dedicated in 1954 and named after the former head of hatchery operations. At this point, the park was inundated with ponds (photo A). During the 1960’s when US-131 was constructed north of I-96, the ponds in the southern half of the park were filled. (Photo B). In the 1980s, the site was again modified to construct the three ponds that exist today. As part of that project a water pump system was created to pump water from the creek into the ponds to maintain water levels and help circulate water through the ponds. Most recently the park has undergone several transitions in anticipation of the creek restoration project. This included moving the maintenance building to the west side of the railroad tracks and updating the parking to accommodate more spaces for the open shelter picnic facility.

To learn more on the history of the park area, be sure to visit this informative page provided by the Comstock Park Downtown Development Authority!

This park improvement project involved removing retaining walls, concrete lined creek channel, ponds, as well as some of the existing paths in order to safely remove the walls and to develop a floodplain area along the edge of the creek. The park has been regraded, paths were re-built, a boardwalk connection from the parking lot to Lamoreaux Drive was built, a  bridge crossing near the library was installed, an overlook deck constructed, and new playground equipment was installed.